Harvest is over for another year, and this year we have really seen God’s hand and blessing over the Brighton Food Bank. During the first five weeks of Harvest we were able to designate a staff member to deal with deliveries and manage the sorting room. This year, Sara, was joined by 10 helpers, who enabled the mountain of generous donations to be dated and sorted. Some of our helpers were already part of our volunteer team, or from local churches and the community, however, some were clients form our Brighton Food Bank who wanted to give something back. 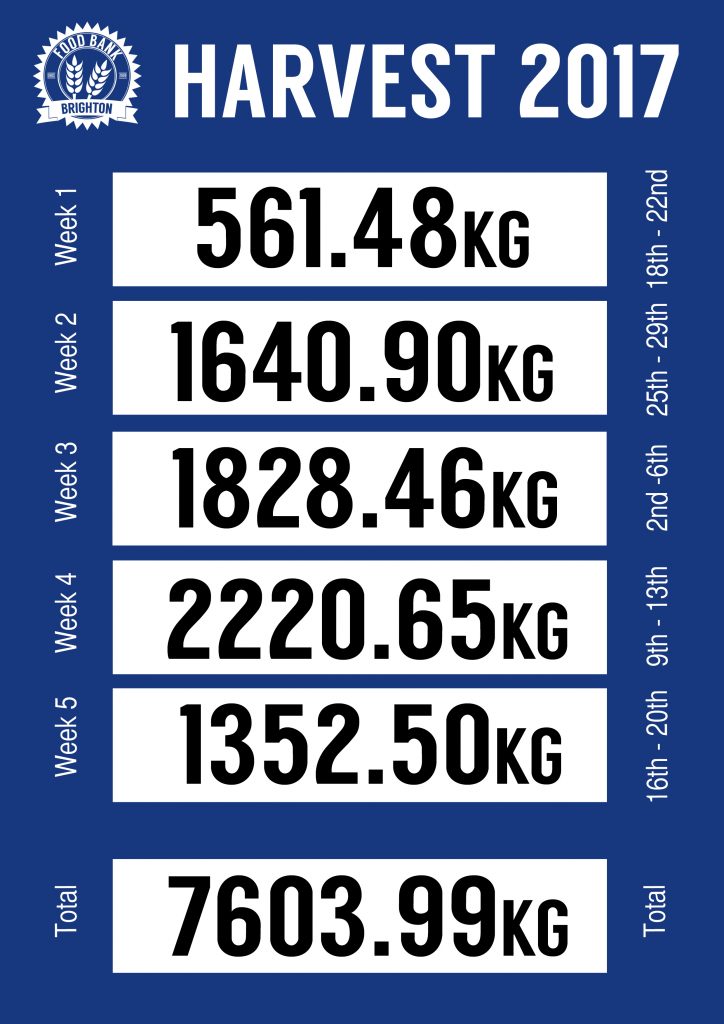 This image show that we were donated a grand total this harvest time of 7.6 tonnes!

Thank you to each individual, church, and school who have generously given and to everyone who has been part of this amazing Harvest.

Our Schools team have been traveling around visiting schools in Brighton and Hove and beyond presenting their Harvest assembly.

They have given school children a clearer understanding of who the food collected will help by showing a video of the story of one of our clients. They have shared with over 7000 children what Jesus said about including everyone in our lives, and have told them what a great thing they have done in bringing just a few items into school that will add together and end up feeding many people.

In total the Schools team helped collect and deliver 3755 kg, which is around half of all the Harvest food donated! As a result of the children hearing about the needs of our Brighton Food Bank clients, several schools have already committed to take part in  collecting for our Christmas appeal, the Reverse Advent Calendar.

Bev, our Rest Homes Team Leader, has been out to many homes across the city with a Harvest message over the last month we asked her how it went:

“It’s amazing how people remember the traditional harvest hymns such as ‘We Plough the Fields and Scatter’, although they are only sung once a year. In the first part of our Harvest service we considered all the provision God has for us by looking at a basket of foods and remembering which people’s favourites are and what it was like when food was rationed. Then we took the opportunity to thank God for everything he has given us. 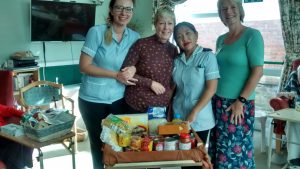 In the second half of the service we looked at Matthew 4:4 ’It is written that man shall not live by bread alone but by every word that proceeds out of the mouth of God.’ It is easy to be too engrossed in our physical needs and neglect our spiritual health. We eat three times a day with snacks in between, but how often do we read the Bible and pray? The residents who are able are encouraged to read the Bible, if they need one I can arrange to get them one. We also offer a booklet with a months’ worth of one verse Bible readings in large print, which is much more accessible for many. We also encourage the residents to pray each day to develop their relationship with God and offer pray with each person at the end of the service.”

This year, our Brighton Food Bank are asking for your Christmas collections to be in the form of a Reverse Advent Calendar.

They are asking if each day for the 24 days in advent, you could collect items and put them in a box. This is our list of things we would love for you to collect –

We would also ask, if you would like the clients to receive your items before Christmas, please deliver them to us week beginning 11th December.

Thank you so much, and we are looking forward to receiving your goodies.

Bev, our Rest Homes Team Leader, visits 24 Rest Homes across the city and she had a lovely experience this month. We asked her to share it and this is what she told us:

Last week Martine, one of our volunteers, and I visited one of the homes for those with advanced dementia. Sometimes our visits can be challenging with lots of movement, noise, and a sense of anxiety in many of the residents. We had an extra time of prayer before going in asking God to go before us and prepare people’s hearts before we arrived. This time the atmosphere was a little more relaxed as we arrived, and as we sang the room became more and more peaceful and residents started to engage with the singing. We eventually came to singing The Lord’s My Shepherd which, although well known, is quite “wordy” for the client group. However, as we sang, the volume swelled as more took part and it was a beautiful time of worship. This was followed by saying The Lord’s Prayer and so may who have difficulty with a coherent sentence were saying the prayer with confidence and enthusiasm. As we were praying, the hairs on my arm stood on end. So often I quote Matt 18.20 “Where two or three gather in my name … I am there among them”, and that afternoon there was such a strong sense of His presence with us.

As we left the home we could hear a resident happily singing a hymn to himself in his room. When we got to the car I said to Martine I had felt goosebumps during The Lord’s Prayer and she said she felt the same, all through the service. We had a truly beautiful afternoon.