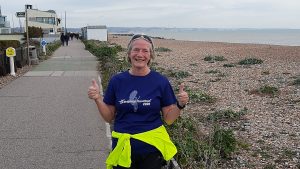 For many of us, this year has felt like a marathon, however, few people have had the chance to complete one! Bev, our Rest Homes Team Leader, attempted to run her first marathon earlier this year when Brighton Food Bank were gifted two runner places by Brighton marathon organisers. Bev had run the Brighton half marathon in February, so she felt confident in bringing home a medal for us! 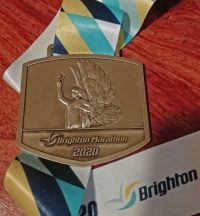 Due to the pandemic, the usual marathon event had to be cancelled and, instead, a virtual marathon was offered. What’s a virtual marathon? Well you do have to run, but on your own, rather than with thousands of others at an event. Bev sustained a running injury during training, but this did not stop her! The virtual marathon meant that she could run the distance in segments rather than all in one go. Despite her injury, Bev completed the full 26.2 miles in early October and received her well deserved finishers medal. She hopes that next year she will be able to run the real thing!

If you would like to sponsor Bev to support the food bank and help her meet her target please click the button below: