Fantastic is a word that has followed almost every one of our Schools team Easter assemblies. Focusing on the Christian message of Easter, the team retold the story using a news report, crossing live to a reporter who was outside of the tomb. Now obviously we aren’t living 2000 years ago, and of course back then they didn’t have television, However, our team rolled straight into the ‘report’ and the children and teachers were taken in instantly, forgetting where and when it the story was set. 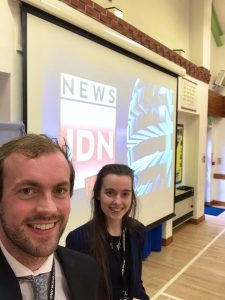 Our team used green screen technology to achieve the desired illusion outside the tomb, and previous team leader, Kerry, and our very own Office Manager, Becky, featured in the reports.

The assembly had humorous moments, as they crossed live to the fictional Jerusalem Jellyfish football team’s top goal scorer, and times for the children to reflect as we came to the realisation that Jesus’ body was no longer in the tomb.

The feedback that our team received was really positive, with one head teacher saying; ‘That was a very professional, well scripted presentation, thank you so much for coming in.’

A head teacher in another school also commented; ‘That was very clever, it’s given me ideas for how I can do assemblies!’

It has been sad to say goodbye to this fantastic assembly, however, we know that our team will be out and about in no time with their summer ‘changes’ presentation. Let’s hope our team make it another fantastic one!