Our Schools team have recently completed their Easter assembly tour, and we caught up with Lloyd to hear what it was all about.

‘For this assembly, Kerry, Emma, and I sat down and thought about what the heart of the Easter message is, after much discussion and sharing of ideas, we decided that our message would be one of hope. 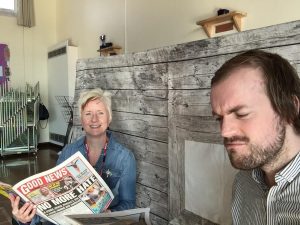 The assembly was based around two characters that were commuting by train, both reading newspapers. The character that I played saw all the negative headlines in the newspaper and was let it overwhelm him, and get him really angry and upset. The other character, sitting across from my character, replied calmly to the negative comments with “it’s Friday now but Sunday’s coming”, drawing out the fact that there will be hope. The following day comes, and my character again saw all the negative headlines, this time from Good Friday, for example ‘Jesus nailed to a wooden cross!’.  Exasperated, my character said ‘Good Friday, what’s so good about it, sounds like the ultimate bad news day if you ask me!’.  Again the other character calmly said ‘there will be hope!’.

Easter Sunday comes and the headlines are positive, my character is shocked as he reads the headline ‘God in control!’.  The assembly then drew to a close with the fact that Sunday always comes, no matter how bad things may seem there is always hope. Obviously, as Christians, we believe Jesus has risen and he is our hope, however the message of hope is something that everybody could take away from the assembly.

The assembly was received well in all of the schools that we visited, one head teacher said it was ‘Cracking’ (no egg pun intended), and we were given feedback from a pupil who was discussing with a friend how boring their normal assemblies were.  When asked what the best assembly they had seen recently, she said “the one that the City Mission did”.’