Lloyd, our Media and Communications Manager, met up with Chris from Centre Church this week as he is planning on running the Brighton Marathon for us in April.

Hello Chris, please give us a bit of background about yourself and what you do in the city?

“I’ve been in Brighton for 3 and a half years.  I moved down from Manchester to get involved in a small church plant called Centre Church, which is in the Kemp Town area. I felt a real sense of the calling of God on my life to get involved in Brighton, and to see His kingdom established in places where it’s not already.

I was initially involved in Centre Church as an intern, and more recently as a campus pastor, which has been a cool journey and a learning experience for me, but it’s really great and I really enjoy it!”

How did you find out about the work of the Brighton and Hove City Mission?

“I’ve been aware of different City Missions in various places, throughout my life. I think with the Brighton and Hove Mission, I became aware of it through connections with individuals in Brighton itself, seeing the work that is done there, and obviously seeing the Brighton Food Bank as I’m going about my shopping in various supermarkets.”

When did you start running? 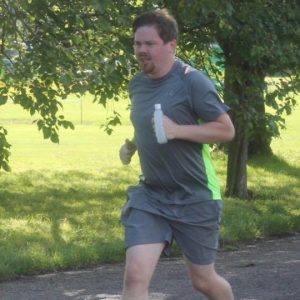 “I started running in February 2015 as a way to lose a bit of weight. I noticed that I was overweight, well, quite overweight, and I needed to do something to sort it out. I was at the stage where if you forgot your keys and have to run back up the stairs to get them, you have to take a second to breathe at the top as you are so out of breath! That’s not a good condition to be in, especially as I was still in my twenties at that time! With my thirtieth coming up, I thought that it is time to sort this out, it’s time to get a bit fitter and more active!

I started off by doing the couch to 5k, through a series of podcasts, and that felt like the hardest thing that I had ever done in my life, but it was really rewarding! Throughout those 9 weeks and beyond, I saw the mental health benefits of exercise and just continued to do it.”

So you have chosen to run the Brighton Marathon in April!

“I think I needed a big goal to help keep me going, so I signed up. It’s something that if you know me well and you’ve known me for a long time you would not think that I would do or be capable of doing. So I think that’s why I chose to run it really. I’m not looking for a world beating time, I’m just looking to finish, if I can get under five hours that would be my real goal, but if not then I’ll finish it, and that’s that.”

So you chose to support us, thank you so much, why did you chose us?

“On signing up for the marathon I recognised a lot of people would do it for charities and they give you a list of various charities you can sign up for. I thought about the City Mission in that moment, as the work that the City Mission does aligns with my heart and what I want to see in Brighton, to see people experience the Kingdom of God, to be changed, to be transformed, to recognise who God is, and not though a specific church, ministry, or denomination, simply to be touched by the love of God.”

How is your training going?

“My training is actually going alright, I’m contemplating for the first time maybe trying to get a sports massage somewhere and doing that kind of thing. My muscles are getting a little bit tighter as the miles increase. I’ve got a 10k to run this afternoon, I ran 5k yesterday, and I ran 14k a few days ago, so I’m getting there! We are about 12 weeks away, and so the training really starts to kick on from now, and starts to get a bit more intense! “

Did you have a target to reach, how are you getting on?

“I broke it! Initially I put £500 as my target, which I reached this week! So now I need to set myself a higher target, I wasn’t really sure what a reasonable target to go for was, but now we have passed £500, I’m maybe looking to double that!”

How can we support you?

“You can support me by donating! My sponsorship page is www.give.net/chrisathon. Don’t be shy, give as much or as little as you want.”

Thank you Chris, we look forward to seeing how you get on.